What is the Corporate Identification Number (CIN)? 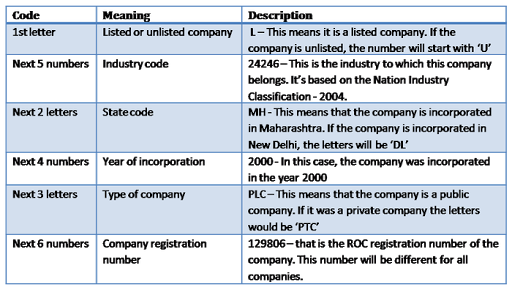 How to read the CIN of a company

You would have come across some long alphanumeric numbers of companies called CIN.

The CIN (Corporate Identification Number) of a company is given as unique code of alphanumeric characters, which, every company that is incorporated in India is given as unique code at the time of its incorporation and this is the Corporate Identification Number (CIN) of that company. This code is given irrespective of whether the company is a private company, public company or listed company or One Person Company.

?CIN is an alphanumeric 21 digit code given to companies. It stores vital information to represent a company.  For example, a CIN would read something like this: U72300MH2014PTC097368. The CIN Number given in the above example is divided into 6 parts. Each part contains information about the Company:

This is what the 21 digit CIN Code comprises of. Next time, you see CIN of a company, there would be many things that you should be able to read easily.

You can look for CIN of the companies in a corporate directory. CIN is also mentioned on the letter head of the company.